skip to main | skip to sidebar

This quilt, work on by many of us in our guild, will hang in the Habitat for Humanity Office. 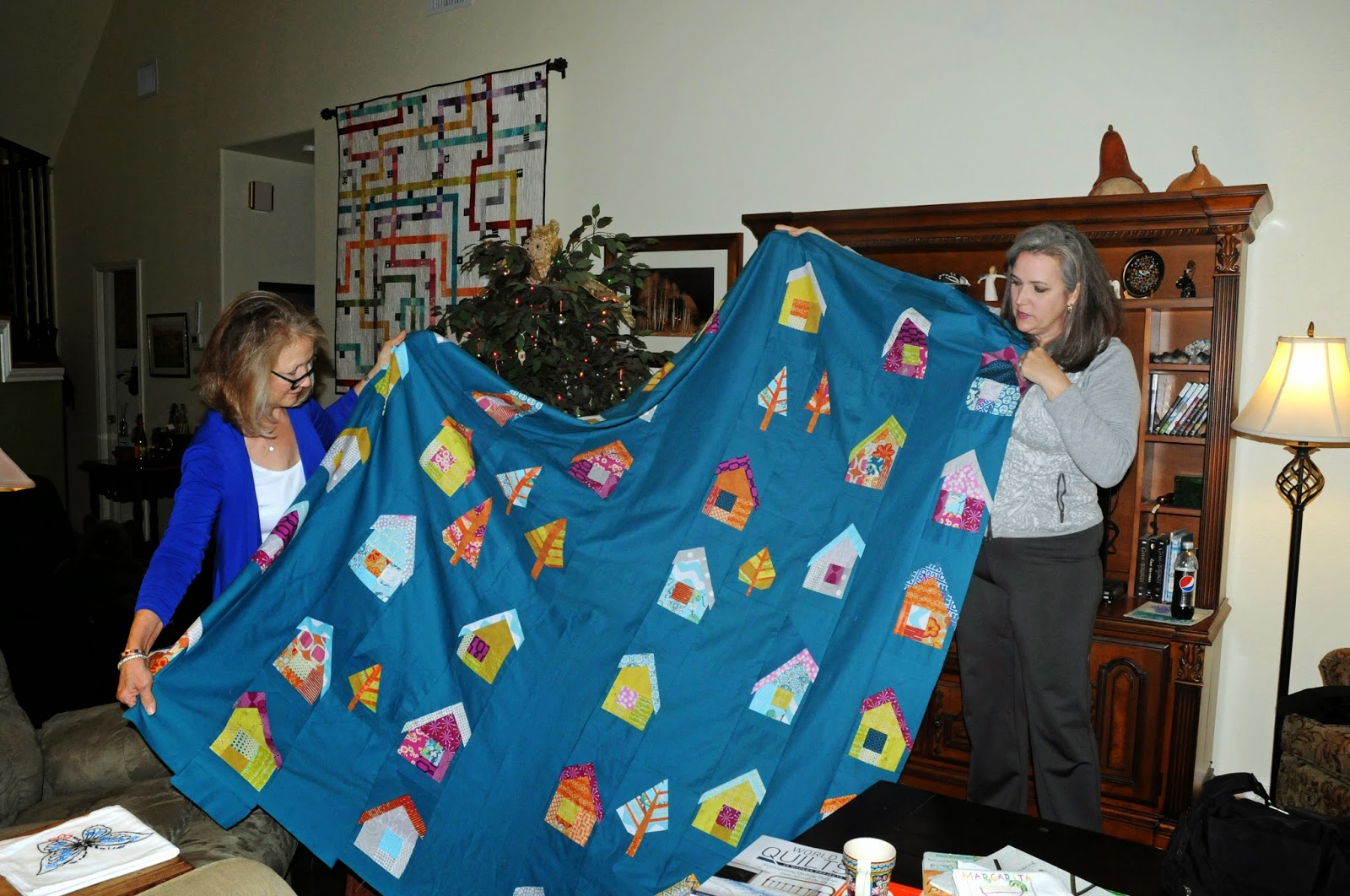 Here is Gracie turning the clock radio on and off.  She gets such a kick from doing this! 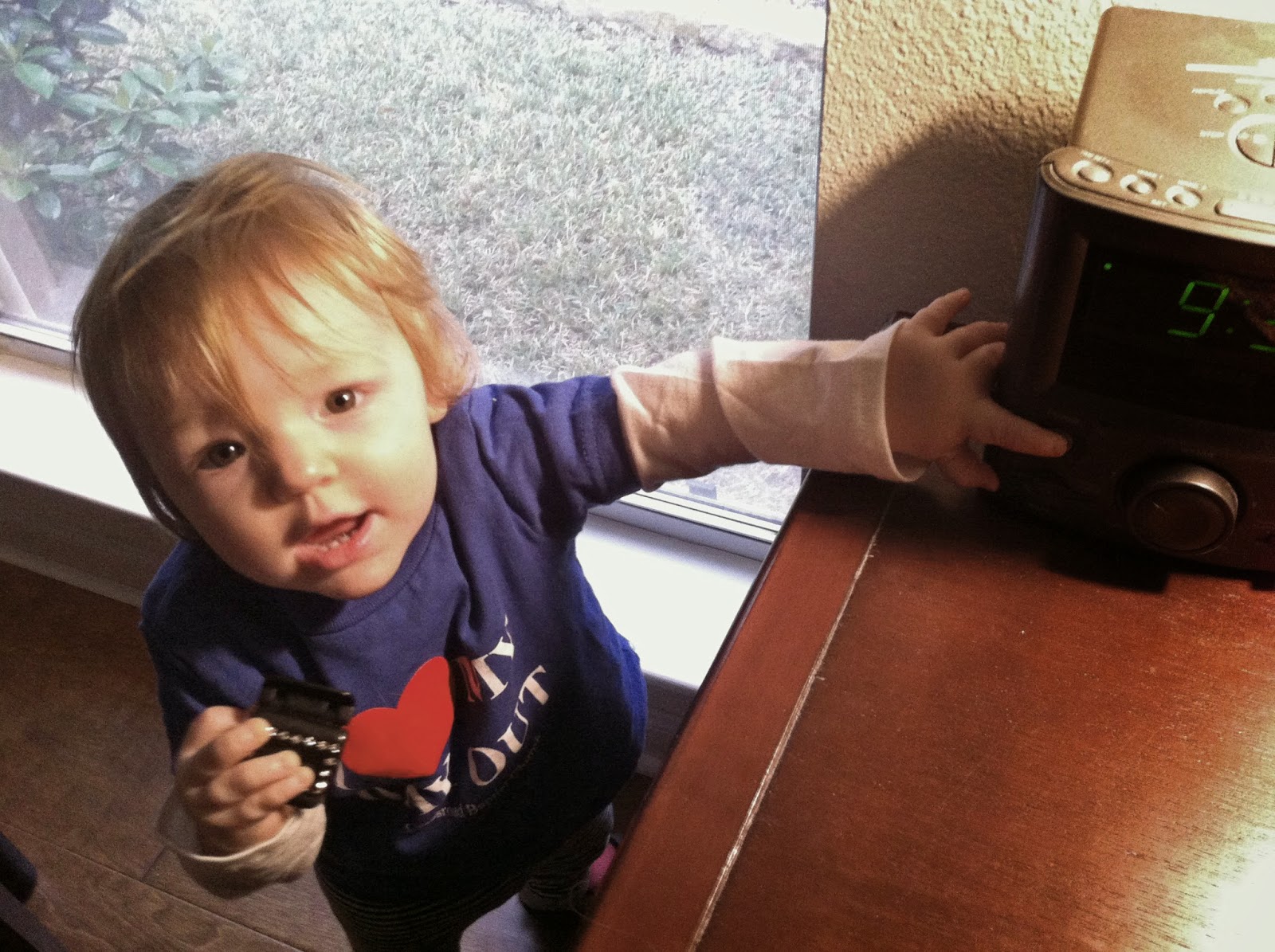 I can decide f I like the color or the black and white version better.  Hmmm? 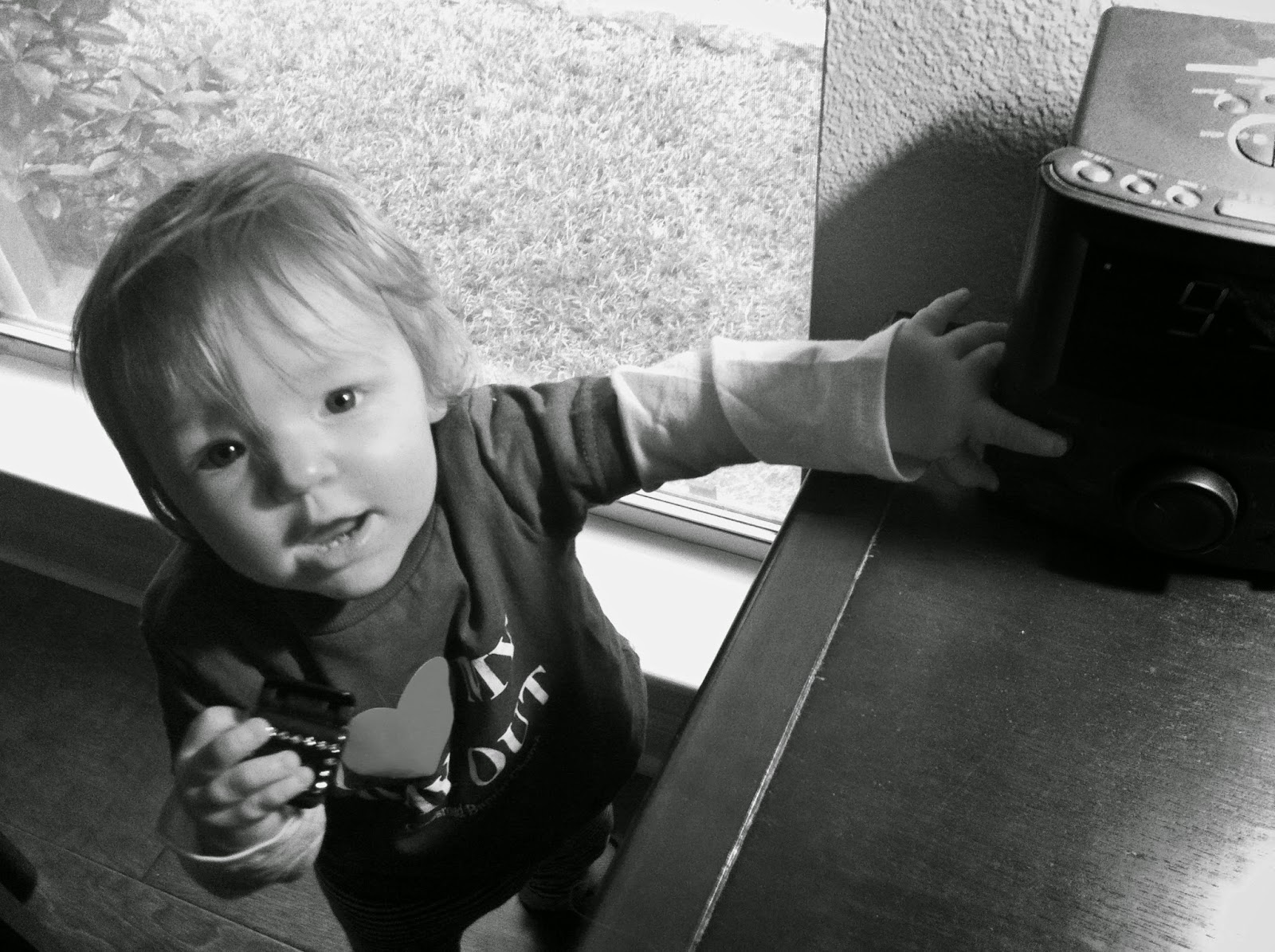 Posted by Toni Owens at 6:36 AM No comments:

Starting a photo challenge but have no idea if I can stick with it.  Here is my image from Dec.  17th. 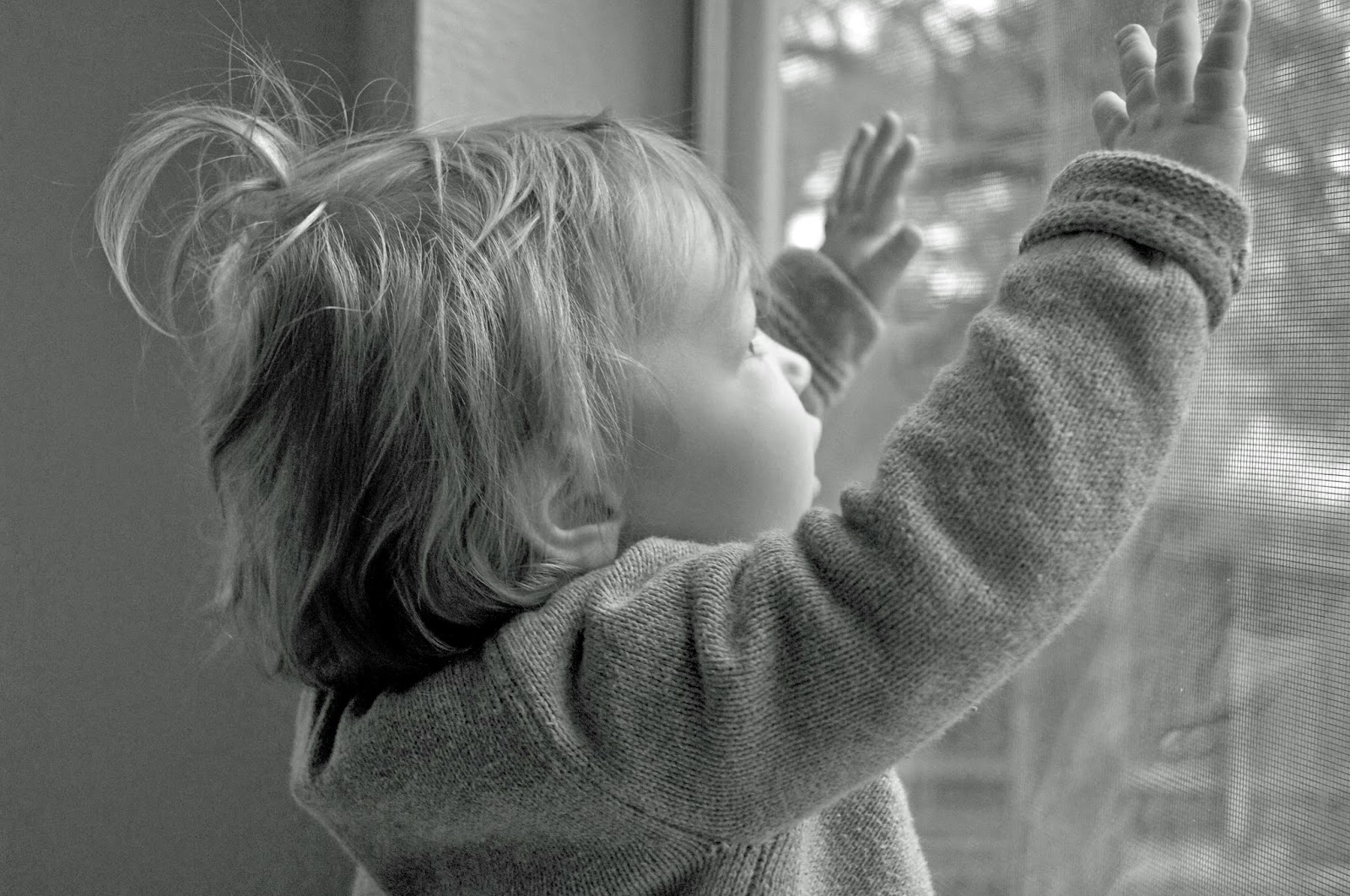 Posted by Toni Owens at 6:44 AM No comments:

I am putting this on my blog temporrily so I can access it from my sewing room.

Clutch Purse Tutorial
1.    Fabric- you want something a bit heftier on the outside, and something somewhat durable on the inside. I bought the outside fabric at Jo-Ann’s and just used some leftover fabric that I had from previous makeup bag projects on the inside (hello, recycling!!).
2.    Iron on-heavy weight interlining (stabilizer). I found out the hard way how important this stuff is; without it, your purse will feel thin.
3.    Magnet buttons
Here’s a step by step:
Step 1: Cut rectangles. Cut both the outer and inner fabrics into approximately 11 inch by 18 inch rectangles. Place the two fabrics facing each other and sew the two long sides and one of the short sides. I used about a 1/4 inch seam.
Step 2: Cut the interlining. Iron on the heavy weight interlining. I wanted some extra heft, so I sewed a layer of interlining on both sides.
Step 3: Starting at the short edge that is sewn, measure about 1/3 of the way down the long edge, and mark it. Along the short edge, measure about 2 to 2.5 inches in, and create a triangle. Sew that line. This is important—it allows for the seam for sewing the sides of the purse- otherwise, the flap folds funny. (I don’t know a better way to describe it.)
Step 4: Turn your purse inside out and iron it. It should look like this:
Step 5:  Attaching the magnet button- thingy.  Fold the purse in equal thirds.  Both sides of magnet have two prongs.  Measure about 1.5 inches to 2 inches from top of flap, mark the center, cut two holes into the liner fabric only. And put magnet in place.

Attach the other side, mark the spot where the prongs hit the fabric. Make two holes in the outside of the fabric and fold the prongs over.
Step 6: Sew the final side short side of the purse. Do this by turning the edges in and ironing them flat before sewing.
Step 7: Turn the bottom part inside out and sew the two sides. 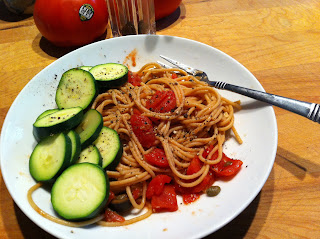 Here is a recipe for an easy Puttanesca sauce:

Saute onions and garlic for 30-40 seconds.  Stir in the rest of ingredients.  Simmer until slightly reduced.  Taste and adjust seasoning with salt and pepper.  I didn't add any salt, but that is just me.  Now I know that the sauce usually calls for anchovies but I never have them on hand and this is quite tasty without.  I tossed the sauce with whole wheat spaghetti and steamed zucchini on the side.

Posted by Toni Owens at 2:42 PM No comments:

When I was asked to bring a breakfast casserole to our Garden Club meeting, I had no idea what that was since I had never made one.   So I couldn't just make one blind; therefore, began researching the different possibilities.  In the end, after trying a couple of recipes, I developed one of my own which meet with great success when previewed with my family.  The garden club ladies gave it rave reviews as well.  Here is the recipe:

The night before, put melted butter in a 9 x 13 pan.  Then layer in this order: cubed bread, cubed ham, sliced mushrooms, and cheese.  Beat remaining ingredients together and pour over the layered ingredients.  Cover and refrigerate over night.  In the morning uncover and bake at 350 for 45 - 60 minutes or until top starts to brown and casserole begins to pull away from the sides of pan and middle is set.  Let cool for about 10 minutes before slicing.

Note:  This also tastes good at room temperature, and the boys liked it reheated in homemade biscuits. Just pop into microwave for 30 seconds.  I am thinking that the ham and mushrooms could be changed out with an infinite number of things!!
Posted by Toni Owens at 5:20 PM No comments:

Since my Friday night catered dinners have become a continuing event, I'm thinking that I need to keep track of what I made as I don't want to duplicate too much if I can help it. So I will make a list of what I can remember so far.
Chicken Wings with orange marmalade glaze, cold slaw, potato salad, and chocolate chip cookies
Shrimp Louis
Grilled Sirloin with mixed veggie salad and black berry cobbler
Grilled Halibut with Herbs and Capers, salad, poached pears, lemon chess pie
Gosh that's as far back as I can remember, but I know I served a flan with something. Wonder what? And variations of chess pie too. Funny how one can remember desserts but not the main meal?
Last night I made Bar-B-Q pulled pork on french bread along with a spinach salad and lemon bars for dessert. The BBQ sauce was not homemade but I am thinking about making my own BBQ and tomato ketchup from now on. We will see.
The new sourdough starter did not turn out well, and I had to throw it away. I think it got too hot sitting on the stove top next to a vent from the oven. I did not realize that the oven put out so much heat to the back burners when things are baking. Thanks goodness I kept my tried and true starter which has not failed me yet.
Posted by Toni Owens at 1:45 PM No comments: